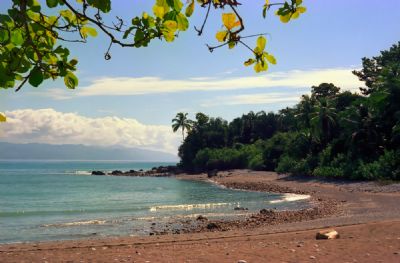 Matapalo is a tiny, laid-back beach hamlet located at the tip of the Osa Peninsula near Puntarenas, packed with modest cabins and eco-friendly bungalows that encourage tourists to have an all-encompassing encounter with nature.
This town is committed to environmentally friendly practices, and the majority of the lodges here rely on solar energy. Matapalo has been awarded the Blue Ecological Flag for its commitment to conservation and the preservation of the surrounding ecosystem - it's the ideal spot to visit without leaving a carbon imprint.

Matapalo Cabo Costa Rica, or Matapalo as it is more generally known, is a tiny beach hamlet located on the tip of the Osa Peninsula about an hour south of Puerto Jimenez. This area is known for its environmental initiatives, and the majority of the hotels and cottages use solar energy. The beaches in the Matapalo region have been awarded the prestigious Blue Ecological Flag. All for their attention on preserving the region's natural beauty and reducing the carbon footprint of individuals who live and visit the area. Visitors visiting the Playa Matapalo region will undoubtedly find quiet, unspoiled beaches with abundant plant life and animal activity. A hidden treasure in Costa Rica's southern Pacific area! So relax on the Playa with a tropical cocktail, or if you're feeling more energetic, go on a horseback riding trip and see a magnificent sunset while viewing animals like howler monkeys and other birds.

Things to do in Matapalo

If you want to appreciate Osa's virgin primary rainforests and all of its unspoiled beauty and magnificence away from the noise and bustle, this beach is a rare jewel. Playa Cabo Matapalo is a secluded, rocky beach on the Osa Peninsula's southern point.

Experienced surfers may wish to visit Playa Pan Dulce, which has world-class surf breakers regularly. On the other hand, Surfers must be wary of the hazardous pebbles that line the bottom of the ocean. The backwash is located near Pan Dulce and has a sluggish right at low tide that breaks over a rock in the center of the bay.

Swimmers may wish to visit Playa Carbonera, which is noted for its little ponds produced during low tide. Matapalo Beach is the southernmost of all the beaches on the island, and it has one of the most isolated shorelines in the country. This peaceful coastline is ideal for anyone seeking to get away from the crowds.

Cabo Matapalo Costa Rica is made up of three beaches that spread over five miles. Surfers will appreciate the uncrowded beaches as well as the fantastic surf breaks! Matapalo's waves are not always steady, but they are huge and ideal for experienced surfers.
With its lengthy waves and long tubs, the Pan Dulce is the most famous surf beach! The third beach, known as Backwater, is better known for longboarding on its steep waves. There are several local surf teachers and guides in the region and businesses to rent and repair equipment. However, bear in mind that certain areas are somewhat isolated. Thus needs may be more challenging to come by than at other surfer beaches.

King Louis Waterfall is a short trek from Cabo Matapalo and is accessible with or without a guide. It provides waterfall rappelling activities and bathing in the pool at the bottom of the 90-foot elevation. In addition, the waterfall offers a one-of-a-kind tree-climbing adventure, with thrill-seekers attempting to climb a 100-foot Strangler Fig and ring a bell at the summit.

There are miles of beautiful routes for enthusiastic hikers to explore with a professional guide. You are also likely to witness some of the park's unique species, such as Scarlet Macaws, monkeys, sloths, and tapirs. Every year, sea turtles visit this region, allowing tourists to see the nesting and hatching process. The figures for Corcovado are highly remarkable. There are 13 main habitats, four monkey species, four sea turtle species, and over 40 frog species. There are also 100 butterfly species, 10,000 bug species, numerous snake species, over 25 lizard species, six feline species, tapirs, crocodiles, peccaries, and over 400 bird species.

Cano Island is a popular scuba diving, snorkeling, and kayaking site. Prepare to see Manta Rays, Dolphins, Whales, Sharks, and Turtles, as well as the beautiful coral reefs. This island, located 20 kilometers off the coast of Drake Bay, is also an archeological site. Mysterious, spherical stones dating back to pre-Columbian times have been discovered.